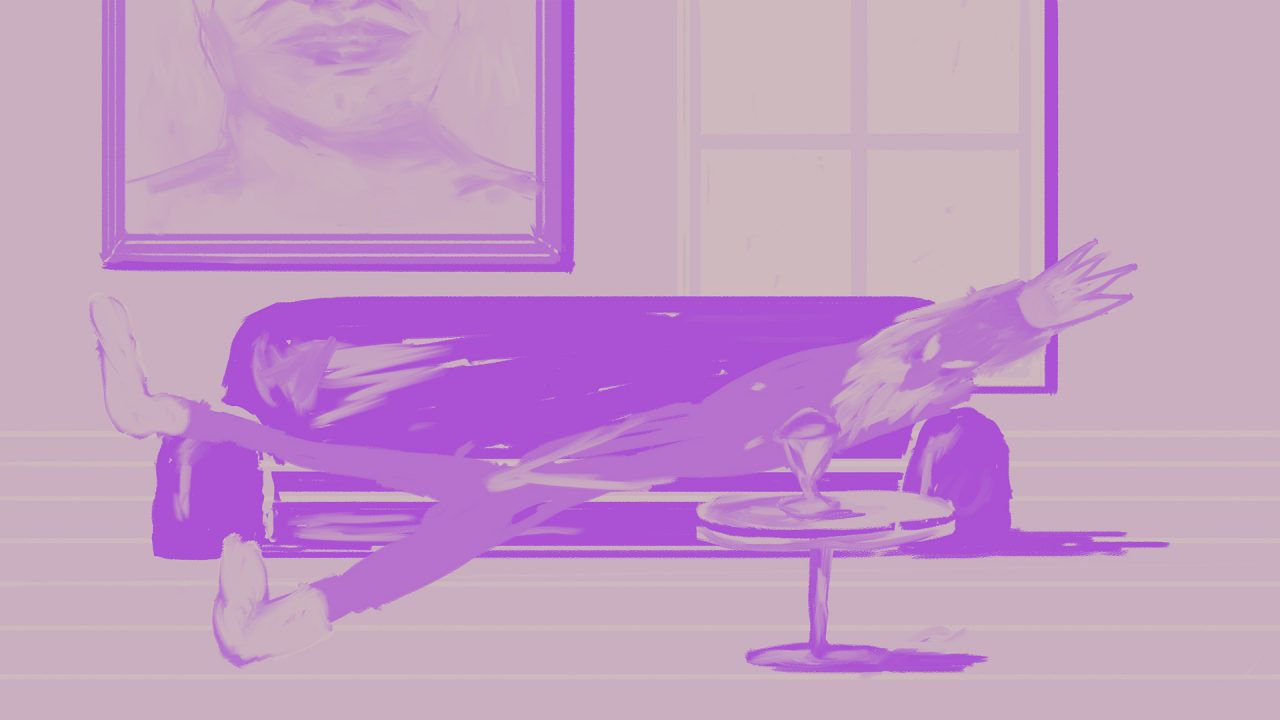 Writing and animating ‘The Old King’

Ongoing laboratory. I wrote and animated a prologue for the story to start defining the aesthetics of the story, to find where is potential for humour in the story, to explore the character and motivations of Alessandro.

To have a more concrete idea of how would I tell the story, in terms of visual and sonic aesthetics, pacing, animation rules, all this to influence further stages of the development of the story and its making.

To figure out the rules of humour I would use to tell the story in an engaging manner.

To understand Alessandro to make his motivations clear and his actions more precise.

It takes a lot of time to work on those necessities in abstract terms. Also, they may work on paper, but that is not at all a guarantee of their effectiveness.

To produce a short film based upon the story, but independent from it. To prevent me from getting overwhelmed by thinking of the whole story.

To engage in further short experiments to move forward in the writing and development process.

To incorporate peers to facilitate and assess technical and artistic decisions. These peers are Alejandro Bonilla Rojas and Julian Gallese.

To read the document in which we work on the screenplay, click here.

1. Brainstorm for days to see if I can come up with a good idea for the prologue. It did not happen.

2. Engage in an experiment to explore Alessandro’s physique and personality.

3. Write part of the screenplay of the prologue from the questions:

4. I have a good start writing the prologue, then I get stuck.

5. Engage in another experiment to start guessing how the Young Prince is like because he is becoming an important character in the prologue.

6. Review the manifestations of The Young Prince in the story.

7. Consider that the rest of the prologue could explore the questions of:

8. Finish most of the first version of the screenplay.

9. Engage in yet another experiment to have a better grasp on the characters from the prologue, because almost all of them are still flat.

10. I am still stuck, needing to clarify the characters.

11. Visualize the characters and locations in different scenes from the current version of the screenplay. Note how the story changed substantially.

12. Animate a short test to move towards defining animation rules and figuring out a pertinent form of humour I could pursue.

13. Engage in another experiment to pseudo-socialize the screenplay to review it from a critical perspective.

14. The first version of the screenplay is ready.

15. Share the screenplay with my two peers who will support me in technical and artistic aspects.

16. Have a video meeting (they live abroad) after they have seen the visualizations from step 11 and gone through the current version of the screenplay. Speak of technical and artistic aspects regarding the animated prologue, production logistics, and what we expect from each other.

17. Design the characters based on the technical and artistic characters that would better suit the story, my take on it, and the available resources.

18. Have a video meeting with Julian Gallese about body acting and pacing. He focuses on running character body acting tests.

19. Make a quick test to try out an idea for zoom ins and zoom outs. My impulse is to visually narrate using the least amount of shots, them being as wide as possible. I am certainly willing to interrupt that tendency when necessary. In this scene, the first one in the prologue, it may be necessary to have a closer look at Alessandro once he has managed to sit on his desk. Instead of cutting from one shot to the other, I added a transitory shot. All the elements in the frame change positions and dimensions when this happens, as one tends to do anyways when shooting from a different angle. The thing here is that we are not “cutting” from one point of view to the other, so my hope is that those elements getting distorted do create an odd sensation in the viewer.

20. Write down the visual and sonic narrative rules.

21. Have a video meeting to discuss, assess and virtually establish the visual, sonic and directorial style. I expect it to be affected by accidents and surprises throughout the process.

22. First approximation to how Alessandro and Amanda could move. Done by Julian.

23. Produce a preliminary storyboard to visually narrate the story. I do one and Alejandro does another one, then we discuss them. Going through this process puts forward inconsistencies and actions that are being forced in the story, I rewrite the screenplay for a third time while storyboarding. Yet, Alejandro points out a number of new problems, so we work on solutions for them. I made them in the span of a few days, after two conversations about this subject with Alejandro Bonilla Rojas. Those are a hundred and one frames. Many of them are static or with limited animation.

In the beginning I had this idea of telling the story in the least amount of frames as possible, as I did in the last narrative film I shot. Alejandro Bonilla Rojas attempted to visually narrate the story in that fashion, but it does not work because it would demand massive amounts of animation (e.g.: characters walking in and out, background and foreground happenings). Not this time.

24. Animate a few specific moments to test and gather ideas about the body movements of such characters. The first one tests Amanda landing in Alessandro’s shoulder. The second one explores Alessandro and some ordinary people walking in the background. Animation tests by Julian Gallese.

25. Scan some early drawings to share them with my peers and to take them into account, stylistically. Early sketches and annotations I found on one of my notebooks. Some images resonated so I am putting them here for the three of us to take a look at them.

27. Attempt of visualization of the first scene.

28. Walk-through for Alejandro and Julian.

31. Voices for animatic. This is an excerpt of me recording the voices for the animatic of the film.

32. Reconsidering the visual aesthetics of the project. That color palette seemed to be exhausting for the eye and since this is also an exploration for a longer film, then it might have been a big mistake to pursue it. Also rethinking other visual aspects.

I decided to expand the color palette even more, backgrounds will be painted. You will see those three tiny pigeons in virtually every shot.

31. Bram Meindersma is now part of the gang, he is in charge of sound. I sent him a set of rules for him to start playing. He has started playing.

31. Update on the visualization of the first scene and part of the second one, trying out weirder perspectives, some camera movements and zooms.